A downloadable game for Windows

A short game made during a semester of Carnegie Mellon's game design class.

This game is a card based strategy game that can be played single player or multiplayer.  Your hand consists of 3 different base cards: skeletons, demons, and spiders.  Skeletons are ranged attackers that deal good damage.  Demons are front line melee attackers.  Spiders are ranged attackers that specialize in dealing on hit effects.  Drag cards onto your play area to summon them.  Drag cards onto each other to craft new, stronger cards.  Use strategy and determination to defeat the enemies summoner.  Right click a card to see a close up.

Set enemy mana rate to around 0.8 for an equal challenge.  Greater than 0.8 for harder, less than 0.8 for easier.

Have two people connect to the same wifi.  Both click multiplayer from the main menu.  One person must type a name into the input box labeled "matchname" and then hit host game.  The match should appear on the other person's screen.  After they click the button with the match name, a "Play" button should appear on the host's screen.  Click to start. 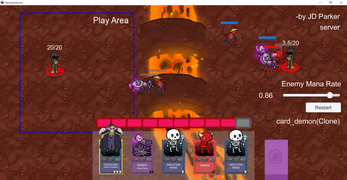 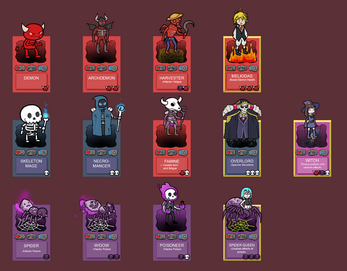